Sue (Susie) Wightman was born and educated in Banbury. She became a music and drama teacher after obtaining a degree from Hull University. After thirty years of teaching she has now turned her focus on the Fine Art world. 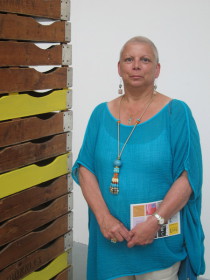 Sue's professional career began at Banbury School, Oxfordshire and then Homewood School, Tenterden, Kent. In 1983 she escaped the 'chalkface and bought a business in Mid Wales. After six happy years and managing to become conductor of the local choral society with only phonetic welsh, she moved back to Kent and into Special Needs. Back at Homewood School she was promoted to Vice Principal with responsibility for the Specialist Arts College. Her last move within education was to Education Consultancy working within the Academies programme across England.

Music and Drama has always played an important part in her life both professionally and socially. Throughout her life she has sung, played (violin, viola, piano), conducted and directed for numerous societies and groups.

She came to Art late in life, having come from an era when all the Arts were lumped together when it came choices for O and A levels!  Whilst living in France during 2004-7, she attended an ex Pat class in the Pyrenees. The magical surroundings, a new found talent and growing excitment led to the start of a new direction. On returning to England she started a formal art course at Warwickshire School of Art and completed the Diploma of Higher Education in Fine Art with Distinction. In September 2014 she continued her studies starting a Masters in Fine Art at BCU.

There have been a few clouds on the recent journey. Firstly having a replacement knee in March 2012 and then being diagnosed with breast cancer in October 2012. New knee problems arrived in 2018 and very little work has been done at the studio for the last twelve months. Art was the escape needed to support this difficult year and Sue is now determined to forge ahead with her new found passion and challenge of the life as an Artist.

In June 2021 Sue moved to Suffolk, after a lifetime of visiting Ipswich and the Shotley Peninsula. Inglenook Studio has just opened in the garden of her Chelmondiston cottage. She is looking forward to many fruitful years of creating in the beautiful surroundings she now calls home.