Welcome to Inglenook Studio in Chelmodiston.

Sue (Susie) Wightman has recently moved to the beautiful Shotley Peninsula, Suffolk. Inglenook Studio can be found at Main Road, Chelmondiston in the garden of Inglenook Cottage.

Susie hopes to continue her experimentation of different mediums and genres of her creative arts and explore the inspirational surrounding countryside and estuaries of the Shotley Peninsula. 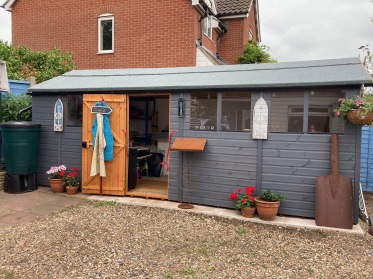 I specialise in Minimalist Installation and Sculpture, drawing on the location of reclaimed objects and giving them new life through art. My work also reflects a strong interest in the use of colour and its harmony and resonance within the context of the chosen pieces. Recently I have been adding sound, light and video into the mix, but still maintaining the Minimalist mantra: “Less is more”.

During 2017 the SIBKNIT Yarn Bombing Crew was formed. The group yarn bombed the village of Sibford Gower for Oxfordshire Art Weeks. I have continued to investigate Yarn Bombing, Giant Knitting and looking at Textile Art, including Indian Woodblock Printing. I hope to explore these mediums further in the future.

My work also uses many other styles and media including detailed Pencil Drawings, Street Photography, Printing and recently investigating Video.

Please browse through the Gallery and let me know your thoughts.

All works are available to purchase and large scale installations can be purpose made for public art spaces and corporate advertising.

I hope you enjoy experiencing my art as much as I enjoy making it.

After 30 years working in the world of Music and Drama Education, Vice Principal of a Specialist Arts College and a National Arts and Special Needs Consultant, I finally managed to find time to explore my ‘artistic’ side, whilst living in France! After attending numerous workshops both in France and then on my return to England, I enrolled on the Fine Art B.A./Dip H.E. course at Warwickshire School of Art/Birmingham City Unversity. I completed the Diploma of Higher Education (Fine Art) with a Distinction and continued to Birmingham in September 2014 on the MA (Fine Art) Course.  I also worked as a Alumni Volunteer in the Fine Art department, Warwickshire School of Art. I have now finished my Masters with a Commendation and was also awarded the Gertrude Aston Bowater Bequest for exceptional studentship.

I continue to sing, play, conduct and direct. I founded the MC Singers. A Community Choir based in the village of Middleton Cheney, South Northamptonshire. The group regularly performed in the village and nearby town of Banbury. Their repertoire includes sacred and secular works from many genres from early music through to musicals and film music. Having recently moved to Suffolk I am now the Musical Director of VIVO - Village Voices on the Peninsula.

"A Line Drawn from the Eye to the Summit" MA Show, School Of Art, BCU

I was the founder member of The Old Mission Hall Studios, Sibford Gower until December 2019. I have been away from my art work during the last couple of years, due to a lack of studio space and a series of knee operations.